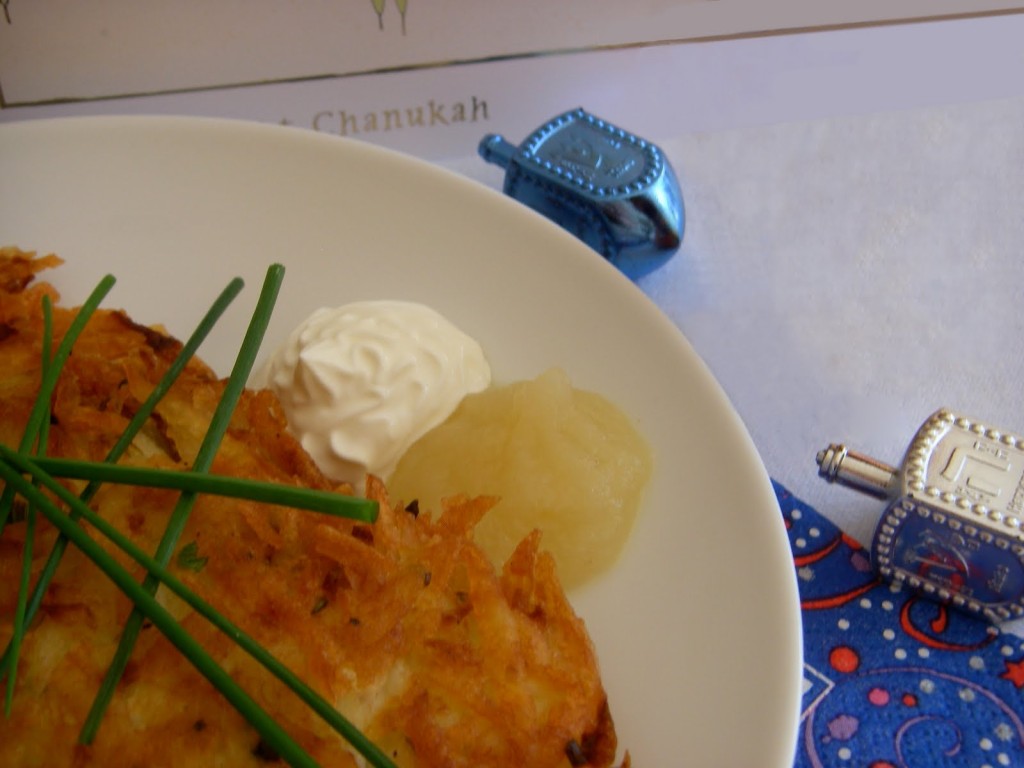 Lasting eight days, Chanukah, also known as the “Festival of Lights”, is a Jewish holiday  which commemorates the rededication of the Holy Temple (Second Temple) in Jerusalem. At Chanukah, one of the traditions occurring in Jewish homes is the lighting of a candle on a Menorah – a candelabrum – in a prayer at dinnertime. Over the years, I have been invited to my Jewish friends’ homes in order to participate in such a joyous celebration.

A popular side dish served at Chanukah dinners consists of potato pancakes called “latkes”. Latkes are crunchy on the outside and deliciously sweet inside. I finally learned how to make them with an added accent of chives. Serve these latkes as tradition has it – with applesauce and sour cream. Enjoy.

1. Peel and grate potato into a large bowl with cold water. Peel and grate the onion into the same bowl; stir in ½ teaspoon of the salt. Let mixture soak 1 to 3 minutes.

2. Meanwhile, in a 4-quart mixing bowl, beat together the egg, remaining ½ teaspoon of salt, black pepper, flour and chives. Set aside.

3. Drain the potato-onion mixture in a colander, pressing down to remove excess water.

4. Transfer the drained potato-onion mixture to a cheesecloth or clean white kitchen towel; roll up and squeeze out excess water.

5. Stir the potato and chives into the egg mixture and blend with a fork until uniform.

6. Heat both oils in a 12-inch, nonstick skillet until oil is hot but not smoking.

7. Measure ¼-cup potato mixture into hands and form a round, flattish shape.

8. Place the flattened potato mixture in hot oil, pressing down with a spatula to form a 4-inch pancake (latke).

9. Measure and prepare 2 more flattened potato mixtures in skillet and cook 3 to 4 minutes per side, on medium-high heat, until latkes are golden brown.

10. Drain on paper towels on a platter.

Note: If oil is not hot enough, the latkes will be oily. 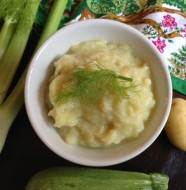