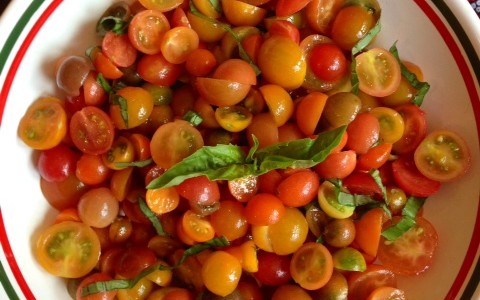 In the last two weeks, as I’ve gone up and down the stalls at the Santa Monica Farmers’ Market, it’s been difficult to ignore the bright, multicolored cherry tomatoes. Don’t they look spectacular? 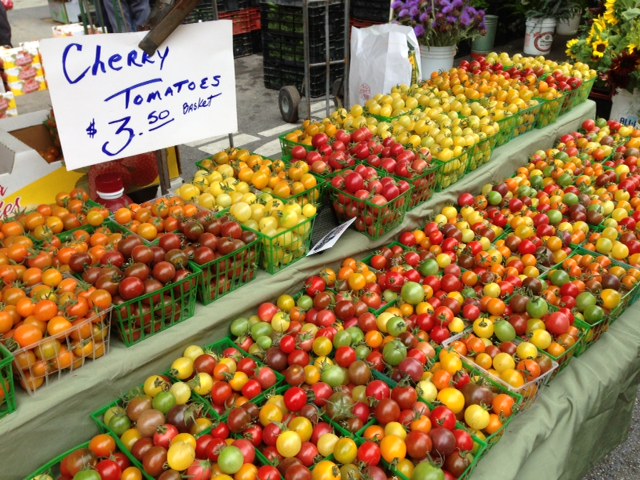 In response to one of our Facebook friends, here’s a recipe for tomatoes and basil (btw, we’re using cherry tomatoes here). Simply, cut the cherry tomatoes in half, add salt, pepper, extra virgin olive oil and basil. Get some good European-style bread and eat your heart out! Now, who says you have to cook to eat well?

Prep time: 15 minutes (for washing and cutting the tomatoes)
Serves: 4

1. Remove stem from each cherry tomato. Cut each tomato in half; set halved tomatoes in a serving bowl.

4. If needed, add a little more olive oil, one tablespoon at a time. Taste the tomatoes with each olive oil addition. 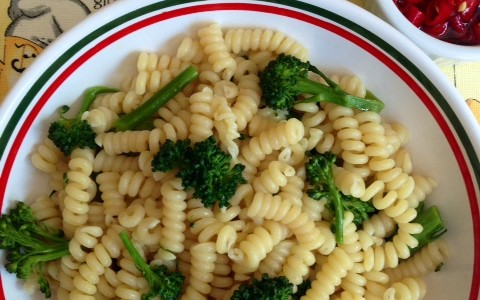 Today, I bought fresh broccolini at a local farmers’ market. After cooking it for a few minutes, I decided to add it to some fusilli (Italian for “corkscrew pasta”). With a little extra virgin olive oil, salt and pepper, it turned out to be quite good – especially with Hot Calabrese Pepper Preserves (previously published on this website on October 18). This pasta dish is simple but good – enjoy.

1. Transfer the drained and cooled broccolini to a large serving bowl.

3. Meanwhile, bring a 4-quart sauce pot filled with water to a boil.

4. Add the fusilli or other short pasta variety to the boiling water, 1 teaspoon salt and stir.

5. Cook, uncovered (medium-high heat), stirring occasionally, for 8 to 10 minutes, until pasta is al dente or crunchy-tender. Different types of pasta will vary in cooking times).

6. When pasta is cooked, drain and add it to the serving bowl with broccolini.

7. Toss the pasta and broccolini. Taste and adjust seasonings, including the olive oil level.

9. Ask guests to add some Hot Calabrese Pepper Preserves and/or some grated Parmigiano Reggiano or Pecorino Romano cheese to their individual pasta bowls.

Vegetarian fritters have been made in Mediterranean countries for centuries. Made with simple ingredients such as leeks, breadcrumbs, eggs and parsley, these fritters will stand out when you serve them as a side for your Thanksgiving turkey!

2. Add the leeks to the salted, boiling water.

3. Cook leeks for 3 to 5 minutes or until just tender.

4. Drain leeks in a colander and transfer them to a bowl.

6. In a large mixing bowl, combine the beaten egg with the salt, nutmeg, black pepper and parsley.

7. Stir in the leeks and 1 cup of the breadcrumbs.

8. The mixture should amalgamate. If it is too wet, gently stir in the remaining breadcrumbs.

2. As the oil heats up, with your hands, form 2-inch patties, slightly flattened.

3. Gently put each patty into the hot oil, standing back to avoid splatters.

4. Fry the fritters on medium-high until the undersides look light golden brown – about 2 minutes.

5. Using a black spatula and fork to assist the turning, turn the fritters over.

6. Cook the second side of the fritters for 2 minutes or until they are light golden brown.

7. Transfer the fritters to a plate lined with paper towels.

8. When all fritters are done, transfer them to an oven-proof baking dish (do not line it with paper towels). Cover the dish with aluminum foil.

9. Right before serving time, warm up the leek fritters, covered with aluminum foil, in a preheated 350°F oven for 15 minutes.

10. Garnish with parsley or basil sprigs and serve.

When I was introduced to Moroccan cuisine, I became addicted to couscous. It is a perfect side to meat or poultry – especially stews. Like rice, couscous is neutral, acquiring flavors from added ingredients or foods it is paired with.

3. Stir fry the squash-onion mixture over medium heat for about 2 to 3 minutes or until onion is translucent.

4. Transfer the cooked mixture to a small bowl and set aside.

6. When water is boiling, stir in the oil, salt and couscous.

7. Remove saucepot with couscous from heat, cover and let stand for 5 minutes.

8. After 5 minutes, fluff up the couscous with a fork.

9. Serve couscous immediately as a side to meat, chicken, lamb or fish. For vegetarian or vegan diets, pair the couscous with salads or other vegetables.

You don’t have to be from the southern region of Calabria, Italy to enjoy homemade “peperoncini” or hot peppers preserved in olive oil. Italians call these “peperoncini sott’olio” and usually sprinkle them over pasta.

First, when buying them fresh from a farmers’ market, here’s what the peppers look like: 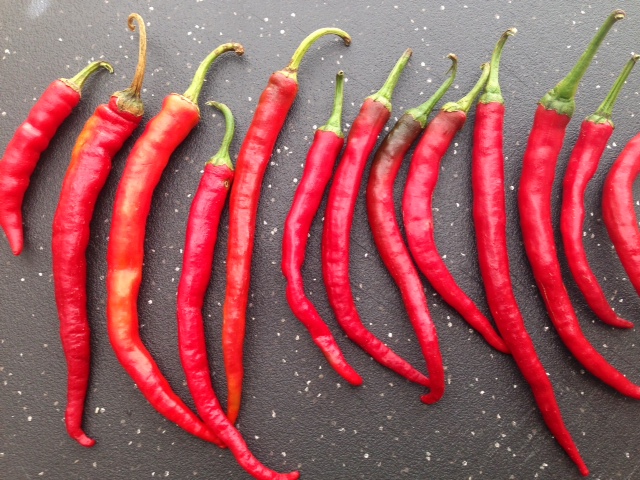 This recipe for preserving the hot peppers is so simple that you’ll wonder why you haven’t made them before. When setting the condiment dish with Hot Calabrese Peppers on the table, make sure to tell your guests that a tiny amount of the peppers will add lots of “heat” to their pasta dish.

1. Place the jar, lid and cover, wrapped in a cheesecloth, in a 4 or 5-quart sauce pot.

2. Fill the sauce pot with water to 3 inches below rim (the water should be 2 inches above cheesecloth containing jar, lid and cover).

3. Bring the water with jar, lid and cover to a boil. Boil for 15 minutes.

4. After 15 minutes, using canning tongs, carefully remove jar, lid and cover from water. Place them on a triple layer of paper towels on a board on kitchen counter; set aside to cool.

1. Meanwhile, wash the peppers and dry each one with paper towels (remove all traces of moisture around the peppers).

2. Line a 12 to 14-inch round colander with a clean cheesecloth – make sure that the cheesecloth is centered over the colander. Let the cloth hang over sides of colander; set aside.

3. To prevent the pepper seeds from burning your fingers, wear sanitary disposable gloves. Using shears, pick up the first pepper by its green stem.

4. Holding the pepper above the cloth-lined colander and beginning at the pointed end of the pepper, cut it into 1/2-inch circles with the shears.

5. Let the pepper circles fall into the cloth-lined colander.

6. Discard the green stem and continue cutting the remaining peppers until you have formed one layer in the cheesecloth in colander.

7. After you have formed one layer of pepper circles, sprinkle them lightly with salt.

8. Follow with a sprinkling of white wine vinegar (about 2 to 4 tablespoons). The first layer of pepper circles will look like this: 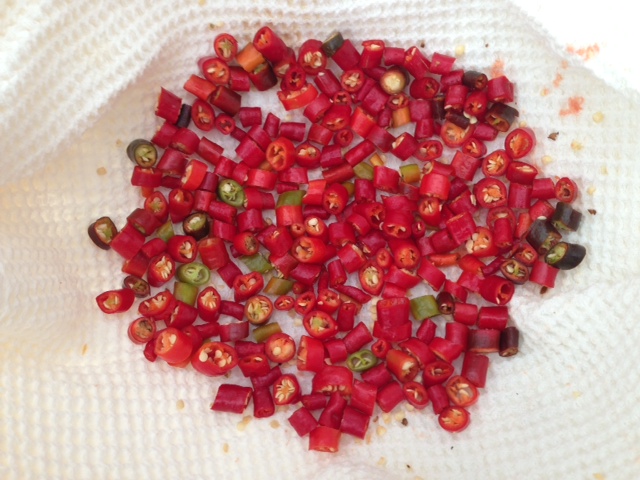 9. Place the second cheesecloth over the first prepared layer of peppers.

10. Repeat the cutting procedure to form a second layer of pepper circles over cheesecloth.

11. Repeat the addition of salt and vinegar and cover the pepper circles with a third cheesecloth.

12. Place a sauce pot filled with cold water (this will act as a weight) over the pepper circles in colander and set aside on a counter for 24 hours.

1. After 24 hours, carefully remove the pepper circles from cheesecloths and transfer them to the sterilized jar.

2. Using a small spoon, gently but lightly press the pepper circles in the jar (this procedure will remove air bubbles).

3. When the jar is filled to 3/4-inch below the rim, carefully and slowly pour the oil over the pepper circles.

4. Fill the jar until the oil covers the pepper circles by 1/2-inch. This means there should be 1/2-inch oil above the peppers.

5. Place lid over jar, followed by the cover. Close tightly.

6. Store the jar with peppers in refrigerator for one month (this will bring forth a nice fusion of all flavors).

7. After opening the jar of Calabrese Pepper Preserves for the first time, store it in the refrigerator. From this point on, the peppers will last 3 to 4 weeks.