A Side of Carrots & Green Beans

It’s February and we should start thinking about summer – the sun, the beach and – wait a minute – the bathing suits, too? Whether we’re happy with last year’s G-string size or not, now is definitely a good time to stop eating and get moving.

Accordingly, I brainwashed myself into believing that sweets can be replaced by salads and vegetables. One of my fav’s is a carrot and green bean dish that I grew up with in Italy. All you need for this is a little salt, pepper, garlic and extra virgin olive oil to boost the natural sweetness of these two veggies.

Should I get caught in a restaurant in the next few weeks, rest assured that you’ll hear me ask my server for fish or chicken, “a side of carrots, green beans – and bring the olive oil, please”.

1. Place green beans in a 2-quart saucepot; cover with cold water and bring to a boil.

2. Cook 2 minutes or until beans are crunchy-tender.

3. Drain and place beans in a large glass or porcelain bowl. Set aside.

4. Meanwhile, place carrots in same 2-quart saucepot; cover with cold water and bring to a boil.

5. Cook for 1 minute or until carrots are crunchy-tender.

Serve immediately as a side to fish, chicken or steak. Drizzle with a little balsamic cream (optional).

*Balsamic cream is a thick, glazed reduction of dark balsamic vinegar. Balsamic vinegar is from Modena, Italy. It is made from the Trebbiano grape and is aged in wooden barrels for several years. There are two varieties of balsamic vinegar: the dark and light variety. Both the cream and the vinegar can be found online at Amazon.com®.

Lasting eight days, Chanukah, also known as the “Festival of Lights”, is a Jewish holiday  which commemorates the rededication of the Holy Temple (Second Temple) in Jerusalem. At Chanukah, one of the traditions occurring in Jewish homes is the lighting of a candle on a Menorah – a candelabrum – in a prayer at dinnertime. Over the years, I have been invited to my Jewish friends’ homes in order to participate in such a joyous celebration.

A popular side dish served at Chanukah dinners consists of potato pancakes called “latkes”. Latkes are crunchy on the outside and deliciously sweet inside. I finally learned how to make them with an added accent of chives. Serve these latkes as tradition has it – with applesauce and sour cream. Enjoy.

1. Peel and grate potato into a large bowl with cold water. Peel and grate the onion into the same bowl; stir in ½ teaspoon of the salt. Let mixture soak 1 to 3 minutes.

2. Meanwhile, in a 4-quart mixing bowl, beat together the egg, remaining ½ teaspoon of salt, black pepper, flour and chives. Set aside.

3. Drain the potato-onion mixture in a colander, pressing down to remove excess water.

4. Transfer the drained potato-onion mixture to a cheesecloth or clean white kitchen towel; roll up and squeeze out excess water.

5. Stir the potato and chives into the egg mixture and blend with a fork until uniform.

6. Heat both oils in a 12-inch, nonstick skillet until oil is hot but not smoking.

7. Measure ¼-cup potato mixture into hands and form a round, flattish shape.

8. Place the flattened potato mixture in hot oil, pressing down with a spatula to form a 4-inch pancake (latke).

9. Measure and prepare 2 more flattened potato mixtures in skillet and cook 3 to 4 minutes per side, on medium-high heat, until latkes are golden brown.

10. Drain on paper towels on a platter.

Note: If oil is not hot enough, the latkes will be oily.

A few weeks ago, at the Santa Monica Farmers’ Market I heard someone ask, “How do you make okra?” This recipe is a wonderful response to that question. While all the vegetables marry well in the stewing, the sauce is the best part and should be picked up with some good Italian bread. 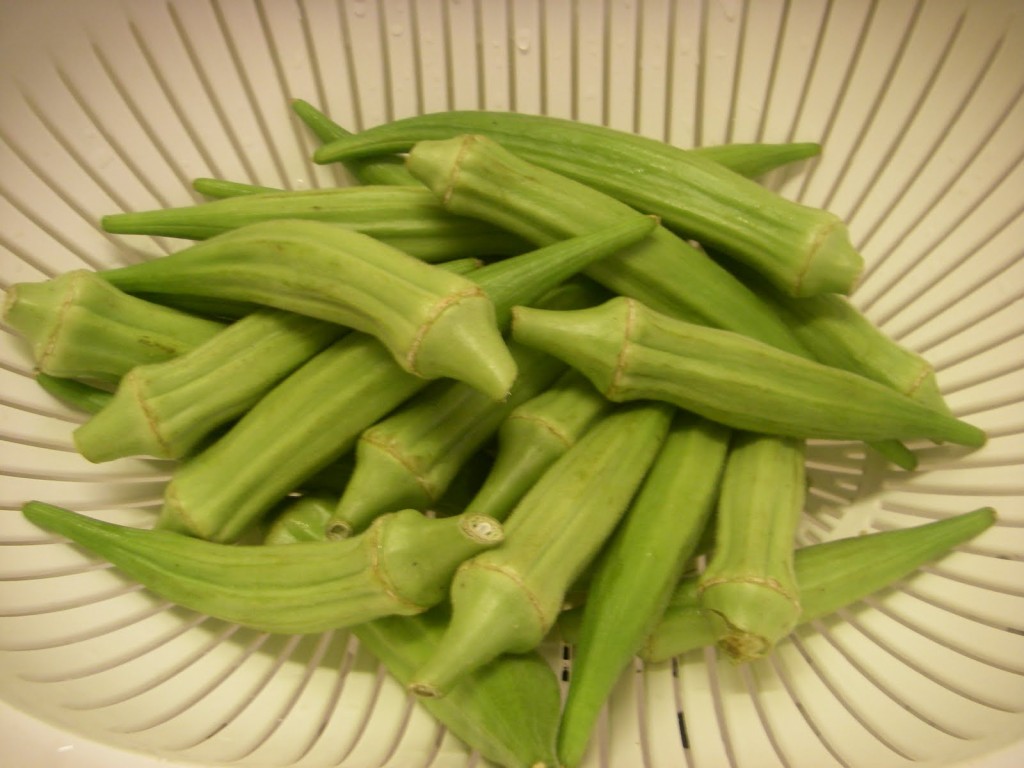 1. Heat the oil in a 4-quart stockpot. Add the okra, eggplant, pasilla and bell pepper strips and stir fry on high heat, about 2 minutes.

2. Add the onion and cook on medium-high heat, stirring occasionally, 2 to 4 minutes.

3. Stir in the vegetable broth and cook on medium-high heat, 1 to 3 minutes. Add salt and pepper, to taste.

Note: This is a vegan recipe.

Although red bell peppers are delicious when freh and added raw to salads or other foods, they’re quite succulent when roasted. This is because their naturally sweet flavors are enhanced in the roasting process. Make this traditional “peperoni arrostiti” salad and discover why Italians have such delicate palates. After savoring every ingredient in this delicacy, you’ll never go back to ready made roasted peppers!

2. Place baking sheet with peppers on an oven rack positioned 6 to 8 inches away from overhead oven broiler/grill.

3. Roast peppers 8 to 14 minutes or until skin is charred.

4. Transfer baking sheet with peppers to a counter and cool, 10 to 15 minutes. Remove and discard the charred skins from roasted peppers.

5. Cut the peppers lengthwise into 1/2-inch thick strips. In a glass or porcelain serving bowl, toss the peppers together with remaining ingredients. Taste and adjust seasonings.

Accompany with some cheese, a salad and a favorite wine.

Hummus is a garbanzo bean dip from Mediterranean countries but has now become popular all over the world. Even kids are reaching for a pita wedge or a carrot stick to dip in hummus. My addition of the chipotle chile accounts for the “heat”. Make Hummus Heat for your friends and family and watch it disappear in moments.

1. In a food processor, blend the garbanzo beans, tahini, garlic, oil, 1/4 teaspoon salt, lemon and chiles to a grainy paste.

3. Transfer the hummus to a 3-cup serving bowl. Make a small well in center (about 1/2-inch deep) and fill it with olive oil; place parsley sprigs as garnish in center of olive oil in well.

4. Serve as an appetizer, accompanied by pita wedges, celery, carrots and cucumbers.

*Sesame tahini is a paste made with ground sesame seeds and can be found in the ethnic foods section of large supermarkets or in Middle Eastern grocery stores.

**Chipotle chiles in adobo sauce are sold in cans and can be found in the ethnic foods section of large supermarkets or in Latin American grocery stores.